Description: This is an introductory NGSI-LD tutorial for FIWARE FogFlow that allows its users to dynamically orchestrate the processing flows on edges. It explains how to enable FogFlow on a distributed or a single node system, register user defined workload patterns and orchestrate them on the edges in the form of running tasks. For better understanding, examples have been included in the tutorial.

The intention of the tutorial is to teach its users how the IoT sensor devices send context data to FogFlow, when and where FogFlow start a processing flow to alters the environment through actuator devices. The figure below gives an overview of the scenario. Sensors, actuators and the dynamic processing flows are explained in the trailing sections in this tutorial, which are relatable to the figure below. 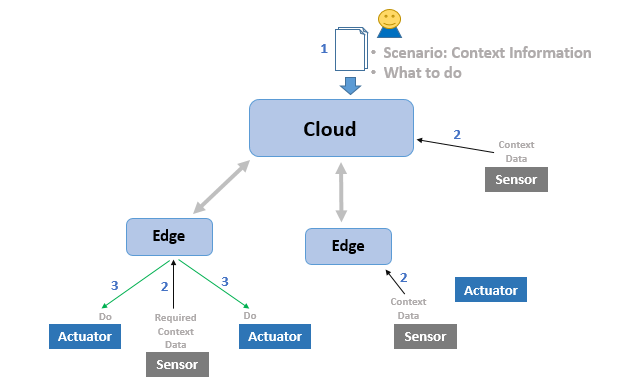 The FogFlow framework operates on a geo-distributed, hierarchical, and heterogeneous ICT infrastructure that includes cloud nodes, edge nodes, and IoT devices. Now, Fogflow has become more dynamic because it supports NGSI-LD format, that means Fogflow is now NGSI-LD compliant. The following figure illustrates the system architecture of FogFlow and its major components across three logical layers. 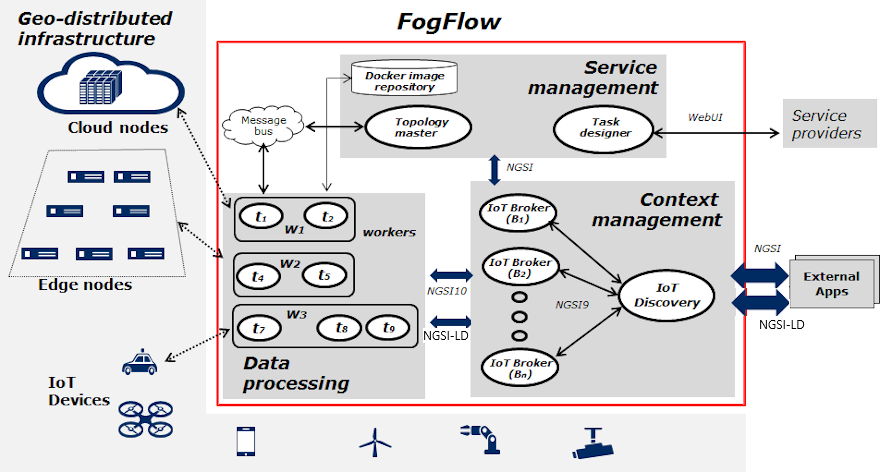 The FIWARE NGSI v2 information model has been evolved to better support linked data (entity relationships), property graphs and semantics (exploiting the capabilities offered by JSON-LD). The new era of data representation and data utilisation has opened up new horizion of possibilities with Fogflow. With the incorporation of NGSI-LD support, Fogflow has gained the power of interacting with other NGSI-LD compliant broker to build a more robust architecture and potential use cases.

To know more about NGSI-LD supported APIs in Fogflow, follow this link 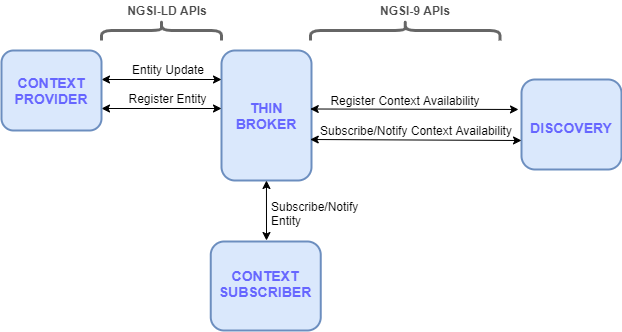 Prerequisites for starting up a cloud node are as follows:

Important: Please also allow your user to execute the Docker commands without sudo.

To start the installation of FogFlow cloud services, do the following:

Please DO NOT use “127.0.0.1” as the IP address of my_hostip, because it is only accessible to a running task inside a docker container.

Firewall rules: To make your FogFlow web portal accessible, the following ports 80 and 5672 over TCP must be open.

Mac Users: If you like to test FogFlow on your Macbook, please install Docker Desktop and also use “host.docker.internal” as my_hostip in the configuration file.

If you need to change the port number(s), please make sure the change is consistence in all these three configuration files. 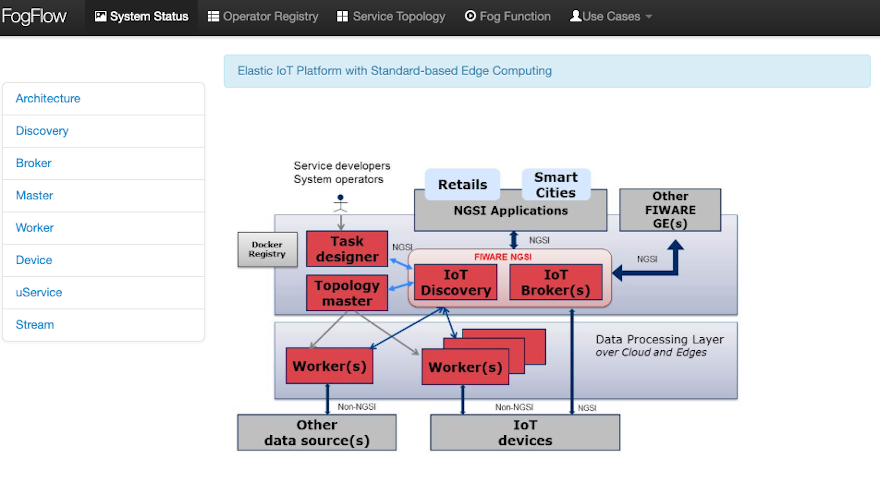 Prerequisites for starting up an edge node are as follows:

To start the installation, do the following:

To receive data from the sensor devices, refer connect to a sensor device. The tutorial contains examples of both NGSI and Non-NGSI devices.

FogFlow can change the state of connected actuator devices, such as, locking a door, switching on a lamp, turning a shield on or off, etc. through its dynamic processing flows. To connect to an actuator device, refer Integrate an actuator device with FogFlow. This tutorial also contains examples of both NGSI and Non-NGSI devices (especially, the UltraLight and MQTT ones).

To get a basic idea of how Southbound actually works in the context of FIWARE, refer this tutorial.

Before moving further, users must have a look at the following:

Define and trigger a Fog Function

FogFlow enables serverless edge computing, i.e., the developers can define and submit a fog function along with the processing logic (or operator) and then the rest will be done by FogFlow automatically, including:

FogFlow allows the developers to specify their own function code inside a registered operator. Check out some examples and this tutorial to know how to create a customized operator.

Python, Java and JavaScript templates to write an operator can be found here.

For the current tutorial, refer the below mentioned steps.

The following steps are required to register an operator in Fogflow.

User can add parameters to operator. To define the port for the operator application, use "service_port" and give a valid port number as its value. The application would be accessible to the outer world through this port. 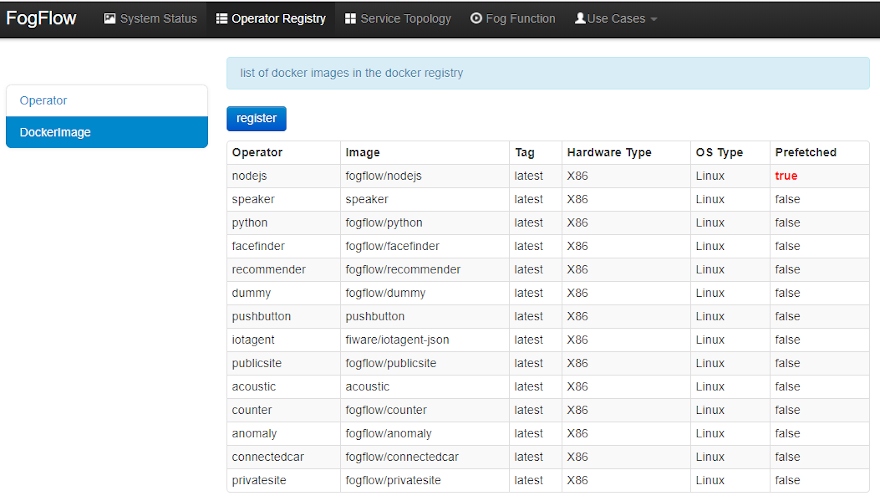 The form is explained as the following.

Use "fogflow/overspeedvd" while registering the docker image for tutorial of NGSI-LD.

The above operator will notify Fogflow, When speed of a vehicle goes beyond 50.

To register the image, select DockerImage from left menu, under Operator Registry from dashboard and click register button.

Right click inside the task design board, a menu will be displayed that includes:

Choose "Task", a Task element will be placed on the design board, as shown below.

Click the configuration button on the top-right corner of the task element, as illustrated in the following figure. Specify the name of the Task and choose an operator out of a list of some pre-registered operators.

Add an "EntityStream" from the pop-up menu to the design board.

It contains the following fields:

Configure the EntityStream by clicking on its configuration button as shown below. "Vehicle" is shown as example here, as it is the entity type of input data for the "overspeed_vehicle" fog function.

There can be multiple EntityStreams for a Task and they must be connected to the Task as shown below. After this click on submit button. 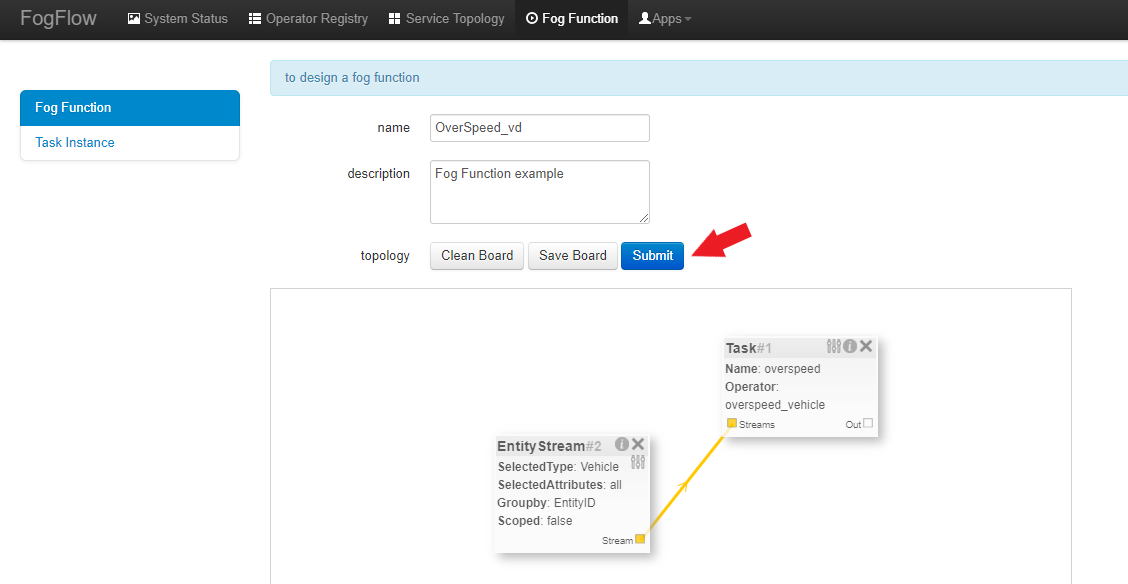 The defined "OverSpeed_Vehicle" fog function is triggered only when its required input data are available.

The way to trigger the fog function is to send an NGSI-LD entity update in the form of a POST request to the FogFlow broker to create the "Vehicle" sensor entity. With creation of this entity, Fogflow automatically launches fogfunction.

Verify whether the fog function is triggered or not in the following way.

Define and trigger a Service Topology

Different from fog functions, a service topology is triggered on demand by a customized "intent" object.

Study of a simple Anomaly Detection use case example can help the developers to define and test a service topology.

This use case study is for retail stores to detect abnormal energy consumption in real-time. As illustrated in the following picture, a retail company has a large number of shops distributed in different locations. For each shop, a Raspberry Pi device (edge node) is deployed to monitor the power consumption from all Power Panels in the shop. On detection of abnormal power usage in a shop (or edge), the alarm mechanism of shop is triggered to inform the shop owner. Moreover, the detected event is reported to the cloud for information aggregation. The aggregated information is then presented to the system operator via a dashboard service. In addition, the system operator can dynamically update the rule for anomaly detection. 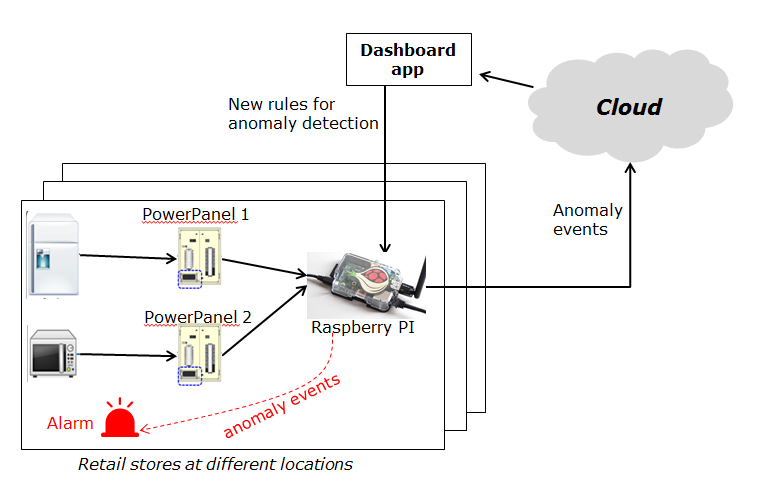 Users can implement there own set of computations in form of operator. For designing and implementing a service topology, it is necessary to implement an operational processing logic in corresponding data format (i.e. NGSI-v2, NGSI-LD etc). For example, if service topology comprises of NGSI-LD data format, then it is important that operators are designed keeping NGSI-LD format in mind.

To refer templates for NGSI-LD operator creation, use these templates. 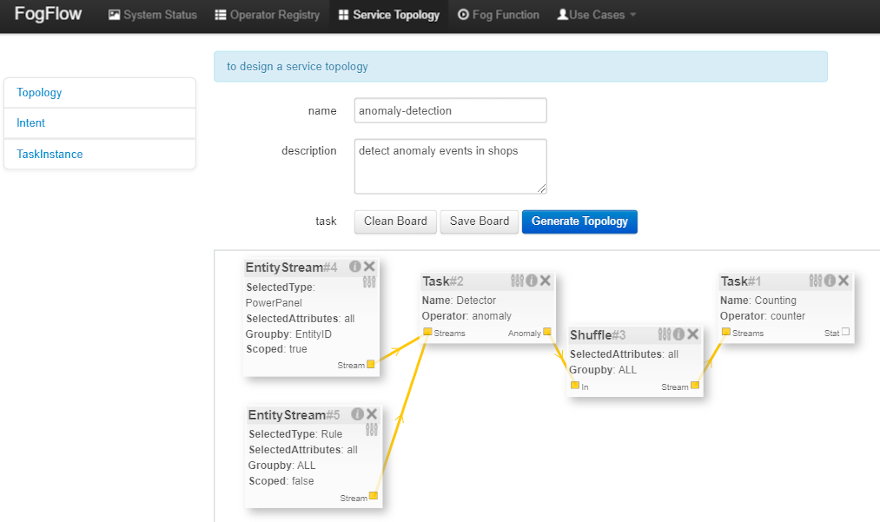 As seen in the picture, the following important information must be provided.

Trigger the Service Topology by sending an Intent

Service Topology can be triggered in two steps:

The intent object is sent using the FogFlow dashboard with the following properties:

Outputs of the Service Topology will be published to the Broker, any application subscribing to the data will receive the notification. An actuator device can also receive these streams as inputs from the Broker. Resulting streams will also be visible in the Streams menu on FogFlow dashboard.

For additional material to understand how FogFlow works, visit FogFlow tutorial. FogFlow can also be integrated with other FIWARE GEs.